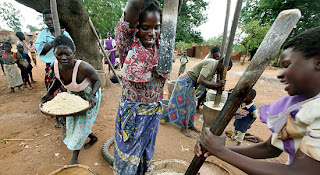 Malawi Women pound the remains of their maize crop into flour to make the local maize porridge in Dedza district.

LILONGWE, Malawi: hovered for years at the brink of famine. After a disastrous corn harvest in 2005, almost five million of its 13 million people needed emergency food aid.

But this year, a nation that has perennially extended a begging bowl to the world is instead feeding its hungry neighbors. It is selling more corn to the World Food Program of the United Nations than any other country in southern Africa and is exporting hundreds of thousands of tons of corn to .

In itself, the prevalence of acute child hunger has fallen sharply. In October, the United Nations Children's Fund sent three tons of powdered milk, stockpiled here to treat severely malnourished children, to instead. "We will not be able to use it!" Juan Ortiz-Iruri, Unicef's deputy representative in , said jubilantly.

Farmers explain 's extraordinary turnaround — one with broad implications for hunger-fighting methods across — with one word: fertilizer.

Over the past 20 years, the World Bank and some rich nations Malawi depends on for aid have periodically pressed this small, landlocked country to adhere to free market policies and cut back or eliminate fertilizer subsidies, even as the United States and Europe extensively subsidized their own farmers. But after the 2005 harvest, the worst in a decade, Bingu wa 's newly elected president, decided to follow what the West practiced, not what it preached.

Stung by the humiliation of pleading for charity, he led the way to reinstating and deepening fertilizer subsidies despite a skeptical reception from the and . 's soil, like that across sub-Saharan , is gravely depleted, and many, if not most, of its farmers are too poor to afford fertilizer at market prices.

"As long as I'm president, I don't want to be going to other capitals begging for food," Mutharika declared. Patrick Kabambe, the senior civil servant in the Agriculture Ministry, said the president told his advisers, "Our people are poor because they lack the resources to use the soil and the water we have."

The country's successful use of subsidies is contributing to a broader reappraisal of the crucial role of agriculture in alleviating poverty in and the pivotal importance of public investments in the basics of a farm economy: fertilizer, improved seed, farmer education, credit and agricultural research.

, an overwhelmingly rural nation about the size of , is an extreme example of what happens when those things are missing. As its population has grown and inherited landholdings have shrunk, impoverished farmers have planted every inch of ground. Desperate to feed their families, they could not afford to let their land lie fallow or to fertilize it. Over time, their depleted plots yielded less food and the farmers fell deeper into poverty.

's leaders have long favored fertilizer subsidies, but they reluctantly acceded to donor prescriptions, often shaped by foreign-aid fashions in , that featured a faith in private markets and an antipathy to government intervention.

In the 1980s and again in the 1990s, the World Bank pushed to eliminate fertilizer subsidies entirely. Its theory both times was that 's farmers should shift to growing cash crops for export and use the foreign exchange earnings to import food, according to Jane Harrigan, an economist at the .

In a withering evaluation of the World Bank's record on African agriculture, the bank's own internal watchdog concluded in October not only that the removal of subsidies had led to exorbitant fertilizer prices in African countries, but that the bank itself had often failed to recognize that improving Africa's declining soil quality was essential to lifting food production.

"The donors took away the role of the government and the disasters mounted," said Jeffrey Sachs, a economist who lobbied and the World Bank on behalf of 's fertilizer program and who has championed the idea that wealthy countries should invest in fertilizer and seed for 's farmers.

Here in , deep fertilizer subsidies and lesser ones for seed, abetted by good rains, helped farmers produce record-breaking corn harvests in 2006 and 2007, according to government crop estimates. Corn production leapt to 2.7 billion metric tons in 2006 and 3.4 billion in 2007 from 1.2 billion in 2005, the government reported.

"The rest of the world is fed because of the use of good seed and inorganic fertilizer, full stop," said Stephen Carr, who has lived in since 1989, when he retired as the World Bank's principal agriculturalist in sub-Saharan . "This technology has not been used in most of . The only way you can help farmers gain access to it is to give it away free or subsidize it heavily."

"The government has taken the bull by the horns and done what farmers wanted," he said. Some economists have questioned whether 's 2007 bumper harvest should be credited to good rains or subsidies, but an independent evaluation, financed by the and , found that the subsidy program accounted for a large share of this year's increase in corn production.

The harvest also helped the poor by lowering food prices and increasing wages for farm workers. Researchers at Imperial College London and concluded in their preliminary report that a well-run subsidy program in a sensibly managed economy "has the potential to drive growth forward out of the poverty trap in which many Malawians and the Malawian economy are currently caught."

Farmers interviewed recently in 's southern and central regions said fertilizer had greatly improved their ability to fill their bellies with nsima, the thick, cornmeal porridge that is 's staff of life.

In the hamlet of Mthungu, Enelesi Chakhaza, an elderly widow whose husband died of hunger five years ago, boasted that she got two ox-cart-loads of corn this year from her small plot instead of half a cart.

Last year, roughly half the country's farming families received coupons that entitled them to buy two 110-pound bags of fertilizer, enough to nourish an acre of land, for around $15 — about a third the market price. The government also gave them coupons for enough seed to plant less than half an acre.

Malawians are still haunted by the hungry season of 2001-02. That season, an already shrunken program to give poor farmers enough fertilizer and seed to plant a meager quarter acre of land had been reduced again. Regional flooding further lowered the harvest. Corn prices surged. And under the government then in power, the country's entire grain reserve was sold as a result of mismanagement and corruption.

Chakhaza watched her husband starve to death that season. His strength ebbed away as they tried to subsist on pumpkin leaves. He was one of many who succumbed that year, said K. B. Kakunga, the local Agriculture Ministry official. He recalled mothers and children begging for food at his door.

"I had a little something, but I could not afford to help each and every one," he said. "It was very pathetic, very pathetic indeed."

But Kakunga brightened as he talked about the impact of the subsidies, which he said had more than doubled corn production in his jurisdiction since 2005.

"It's quite marvelous!" he exclaimed.

's determination to heavily subsidize fertilizer and the payoff in increased production are beginning to change the attitudes of donors, say economists who have studied 's experience.

The Department for International Development in contributed $8 million to the subsidy program last year. Bernabé Sánchez, an economist with the agency in , estimated the extra corn produced because of the $74 million subsidy was worth $120 million to $140 million.

"It was really a good economic investment," he said.

The United States, which has shipped $147 million worth of American food to Malawi as emergency relief since 2002, but only $53 million to help Malawi grow its own food, has not provided any financial support for the subsidy program, except for helping pay for the evaluation of it. Over the years, the United States Agency for International Development has focused on promoting the role of the private sector in delivering fertilizer and seed, and saw subsidies as undermining that effort.

But Alan Eastham, the American ambassador to , said in a recent interview that the subsidy program had worked "pretty well," though it displaced some commercial fertilizer sales.

"The plain fact is that got lucky last year," he said. "They got fertilizer out while it was needed. The lucky part was that they got the rains."

And the World Bank now sometimes supports the temporary use of subsidies aimed at the poor and carried out in a way that fosters private markets.

Here in , bank officials say they generally support 's policy, though they criticize the government for not having a strategy to eventually end the subsidies, question whether its 2007 corn production estimates are inflated and say there is still a lot of room for improvement in how the subsidy is carried out.

"The issue is, let's do a better job of it," said David Rohrbach, a senior agricultural economist at the bank.

Though the donors are sometimes ambivalent, 's farmers have embraced the subsidies. And the government moved this year to give its people a more direct hand in their distribution.

Villagers in Chembe gathered one recent morning under the spreading arms of a kachere tree to decide who most needed fertilizer coupons as the planting season loomed. They had only enough for 19 of the village's 53 families.

"Ladies and gentlemen, should we start with the elderly or the orphans?" asked Samuel Dama, a representative of the Chembe clan.

Men led the assembly, but women sitting on the ground at their feet called out almost all the names of the neediest, gesturing to families rearing children orphaned by AIDS or caring for toothless elders.

There were more poor families than there were coupons, so grumbling began among those who knew they would have to watch over the coming year as their neighbors' fertilized corn fields turned deep green.

Sensing the rising resentment, the village chief, Zaudeni Mapila, rose. Barefoot and dressed in dusty jeans and a royal blue jacket, he acted out a silly pantomime of husbands stuffing their pants with corn to sell on the sly for money to get drunk at the beer hall. The women howled with laughter. The tension fled.

He closed with a reminder he hoped would dampen any jealousy.

The women sang back to him in a chorus of acknowledgment, then dispersed to their homes and fields.

Les douze mots les plus terrifiants de la langue anglaise sont : I am from the Government and I am here to help you (je suis du gouvernement, je viens vous aider).