"In 1987, boys at the orphanage claimed physical and sexual abuse by Geilenfeld in Haiti. (1995) Justin ravitz, representing the government or Haïti at the hearing, said officials wanted the children returned to Geilenfeld's care." 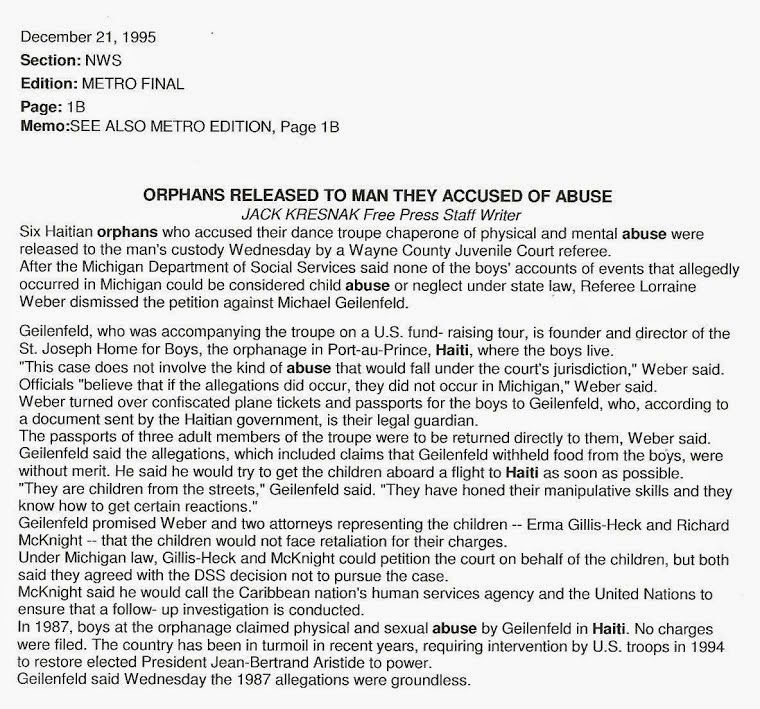 North American Man/Boy Love Association has his own room at the orphanage...

"What would you have me do with information that a member of the North American Man/Boy Love Association has his own room at the orphanage?" Kendrick said, often answering Deane's questions with his own. "What in God's name would you have me do when my concern is making sure that the kids on that campus are safe and that the victims who have come forward are heard?"
Freeport activist accused of defamation defiant on witness stand - The Portland Press Herald / Maine Sunday Telegram
http://www.pressherald.com/2015/01/30/freeport-activist-accused-of-defamation-defiant-on-witness-stand/
____________________
RESEAU CITADELLE : LE COURAGE DE DIRE LAVERITE!!!
"You can fool some people sometimes,
But you can't fool all the people all the time."
(
Vous pouvez tromper quelques personnes, parfois,
Mais vous ne pouvez pas tromper tout le monde tout le temps.
) dixit Abraham Lincoln.
Publié par Cyrus Sibert, #LeReCit @ReseauCitadelle à 21:11 Aucun commentaire: Liens vers cet article

Find on Facebook
Posted Jan. 30, 2015, at 4:40 p.m.
PORTLAND, Maine — Child sex abuse victims rights advocate Paul Kendrick told a federal judge Friday he defied a court order and distributed confidential information because he believed more children were in imminent danger of abuse.
Former Catholic brother Michael Geilenfeld and a nonprofit in which he's involved are suing Kendrick for defamation — Kendrick publicly accused the former priest of sexually abusing children — at the same time that Geilenfeld is facing potential criminal sex abuse charges in Haiti.
Attorneys for Geilenfeld and the nonprofit Hearts With Haiti are now seeking heavy sanctions against Kendrick for releasing confidential emails, as well as excerpts from depositions and a private investigation, gathered in the discovery process of their defamation lawsuit against Kendrick.
On Friday, Kendrick testified in a U.S. District Court hearing in Portland on those proposed sanctions. Attorney Devin Deane, representing Hearts With Haiti and Geilenfeld, said he's seeking monetary sanctions of $50,000, a finding of contempt of court against Kendrick and a default judgment in favor of his clients, among other things.
Deane said Kendrick had been warned by Magistrate Judge John Rich not to distribute confidential court documents, but blatantly defied a court order by doing so again. The attorney urged the court to severely punish Kendrick for the second incident, because the prior warning was not an adequate deterrent.
"This type of outrageous … contempt is unprecedented, and because it's unprecedented, we're asking for serious sanctions," Deane said during Friday's hearing. "The defendant knew what the rules were — they were very clear — and [he] willfully violated them."
Hearts With Haiti is a North Carolina nonprofit that raises money for three orphanages and a day school in Haiti run by Geilenfeld.
Kendrick has insisted Geilenfeld abused the Haitian boys he took in at the facilities. About 19 months after Geilenfeld and the nonprofit filed their lawsuit against Kendrick, Geilenfeld was arrested in Haiti on sex abuse charges.
"These kids had no place to live, nothing to eat. He took them in, and do you know what he called [the abuse]? He called it 'the sacrifice,'" Kendrick told Deane in court Friday under cross examination. "You can become a part of the solution of ending child abuse or you can be part of the problem. You're a part of the problem."
Geilenfeld, a former Catholic brother, remains in a Haiti jail, and the court there will issue its equivalent of a probable cause determination within the next 30-60 days, Deane said in the Friday hearing.
Deane said that will determine whether Geilenfeld goes to trial on the criminal charges in Haiti.
U.S. District Court Judge John Woodcock said Friday it would be difficult for him to rule on the proposed sanctions without knowing whether Geilenfeld is actually guilty or not.
"If [Geilenfeld] is prosecuted and convicted down there, it's a whole 'nother ball game," Woodcock told the attorneys in the case Friday.
While the judge acknowledged the seriousness of defying a court order, he also noted that the information Kendrick released — either through widely distributed emails or posts on a colleague's blog — would be made public anyway if the defamation case here goes to trial.
Woodcock did not immediately rule on the sanctions Friday, and hinted that he would wait to see the results of the Haiti criminal case and local defamation trial before deciding what Kendrick's punishment for releasing the confidential information should be.
If the sex abuse accusations turn out to be false, he reasoned, the dispersal of the damaging information would warrant more severe sanctions than if Geilenfeld was indeed guilty of the crimes.
Kendrick, who was represented in court Friday by attorney F. David Walker IV, testified that some of the information he released was at the time publicly available on the federal court system website, but conceded that in hindsight, he did violate the court's confidentiality order in most of the instances alleged by Deane.
Kendrick said he felt compelled to disseminate the information to alert Haitian authorities and other advocates that children there remained in danger of abuse.
In one such case, he released an excerpt from a private investigation indicating a member of the controversial North American Man/Boy Love Association — a pedophile advocacy group — kept a private room on the orphanage campus.
"There's a bigger thing going on here than the defamation [lawsuit]," Kendrick told the court Friday. "It's about preventing the least fortunate of children in Haiti from getting raped every day."
Maine man accused of defaming former priest says he defied a court order to protect more kids from sex abuse - Maine news, sports, obituaries, weather - Bangor Daily News
https://bangordailynews.com/2015/01/30/news/portland/maine-man-accused-of-defaming-former-priest-says-he-defied-a-court-order-to-protect-more-kids-from-sex-abuse/print/