#Haiti - Adoption: The phenomenon of family rejection, abuse, trafficking and even rape following the death of an adoptive parent. - 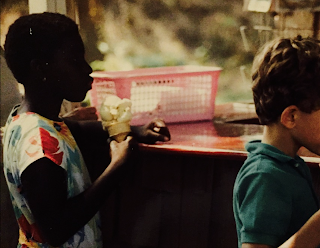 #Haiti - Adoption: The phenomenon of family rejection, abuse, trafficking and even rape following the death of an adoptive parent. (Text by Cyrus Sibert)

Norralie is the first name of a young Haitian lady, stuck between a rock and a hard place. In 1979, she was rescued by an American at the Limbé Hospital, not far from the city of Cap-Haitien. An American businessman residing in Haiti, took to the idea of rescuing this sick baby girl who was most likely abandoned by her biological parents; undoubtedly, desperate Haitian peasants with no other choice.

This foreigner was a good man who showered her with love and affection. He behaved like a good father, imposing on all the respect of his black adoptive daughter. All the members of his large, well-to-do family had to treat his daughter with class, justice and fairness. He made all the arrangements for her physical and intellectual fulfillment.

But, unfortunately, the "Good Samaritan" succumbed to a serious illness. From that moment, everything changed. After her father's death, Norralie found herself trapped in a "black" nightmare, rejected by her white, adoptive mother.

"My adopted father took to his grave all the family love I was entitled to," she told us.

Her life became a living hell. She no longer had any family privileges. She was refused everything: food, clothing, education, affection ... "My money is not for you," was the response she received from her adoptive mother following her request to be allowed to finish high school. She was removed from her father's estate, abandoned to her fate ..., undergoing all forms of mistreatment and abuse from her "mother" and especially from her new partner, since she had remarried.

Everything was her fault. Even when she was molested at the age of 12 by the new head of household, her adoptive mother made her believe that it was her fault and that she had encouraged it. Instead of intervening to protect her, she was instead considered as a rival, sharpening the device of moral and physical destruction. Thus, this adoptive mother decided to campaign against the child to all the friends of the adoptive father and other members of the family who continued to hold her in consideration, in memory of the deceased. The molestation most likely increased this rejection.

This young found herself completely isolated: no family, no money, education interrupted, no legal standing in Haiti. Using the language she learned when she was a child, she was able to survive with difficulty until she made her way to take refuge in her father's country, the United States of America; the beautiful country that she used to visit when she was very small. Since her adoptive mother had never given up on her campaign to isolate this young girl from the Haitian-American social circle which had welcomed her in 1979 and had seen her grow up, she had no choice but to take refuge elsewhere , far from Haiti, in search of a new life.

Here she is, still stuck. Out of spite, her adoptive mother has hidden many things from here. Refusing to give her any papers that might help her take advantage of the nationality of her adoptive father, who during his lifetime had taken steps in this direction. Her "mother" has made it her mission to erase everything, rewriting family history. Even going so far as to tell unpleasant stories about the life and death of her adoptive father, in order to to destroy the image that this young girl had of him.

Yet, in her will, the adopted paternal grandmother, the mother of the adoptive father, left her 10,000 American dollars. This helped finance her efforts to come to the United States.

Even as a wife and mother of two children, this Haitian woman continues to live in an endless nightmare. Sometimes she has no interest in life ... too much misery, too much suffering, too much humiliation. She does not know what to do.

A simple fact summarizes her tragedy: It is something to see, when, out of habit, she still refers to her adoptive mother as “my mother”. Hesitation travels through her whole being, caught between her childish habits that bind her to this woman and the real life she lived by her side.

@ResidentCitadelle investigates this case that raises questions about the situation of Haitian children in the families they are adopted into. For, a white host family can become hell after the death of the white "Good Samaritan" who took the initiative to adopt a black child. Moreover, from experience, we know that acts of rape and / or trafficking are accompanied by permanent abuse of the victims. The rapists, their accomplices and those who protect them always engage in a permanent campaign of denigration of the victims. They act in such a way as to destroy their image, to constantly attack their credibility, to psychologically confine them to the bottom of a well, to isolate them sufficiently so as to prevent honest people from taking them seriously the day they decide to speak.

Accompanying the victims in their desire to leave this well is our mission! The worst part of all this is when they tell you that they have reported their situation to people who should protect them ... Officials, friends of the family who, instead of interceding in favor of the victims , have turned their backs on them.