Rev. Paul Carrier and Douglas Perlitz with Hope Carter of New Canaan, who was one of the biggest benefactors for the Haiti Fund which bankrolled Project Pierre Toussaint. Photo: Contributed Photo, CP / Connecticut Post Contributed 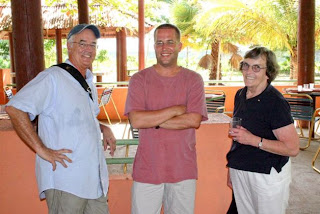 HARTFORD -- A Miami psychotherapist who heads up a nonprofit organization to assist sex-abuse victims will be meeting with 22 Haitian street boys who claim they were assaulted by Douglas Perlitz over a 10-year period.

The disclosure came during a news conference Wednesday in which Mitchell Garabedian, a Boston lawyer who specializes in sexual-abuse cases involving clergy, announced the filing of the 21st federal lawsuit against Perlitz for sexual abuse.

The suit also names as defendants the Rev. Paul Carrier, Perlitz's mentor who helped him create the Project Pierre Toussaint program to educate, feed, shelter and clothe homeless boys in Cap-Haitien, and Hope Carter, a New Canaan philanthropist. The program shut down in 2009 just weeks before Perlitz's arrest by U.S. Department of Homeland Security's Immigration and Customs Enforcement agents.

In the suit, Garabedian alleges that both Carter and Carrier saw the latest plaintiff, Jimmy Jesula, with Perlitz in the latter's bedroom. However, the suit does not claim Carter or Carrier saw Perlitz engaging in sex with Jesula.

Jesula, a soccer player, claims he was assaulted by Perlitz over a four-year period beginning when he was 13.

"I haven't seen the suit," said Timothy P. O'Neill, a Boston lawyer representing Carrier, who has been suspended from his clerical duties by his Society of Jesus order. "These are just allegations."

So far, 22 victims have filed suit against Perlitz. They have also named the following defendants: Carter; Carrier; the Society of Jesus; the Order of Malta, a Catholic charity which provided the initial grant to fund Project Pierre Toussaint; the Haiti Fund, the fund-raising arm of Project Pierre Toussaint; Fairfield University, for whom Carrier served as director of campus ministry and from where Perlitz graduated, and 12 unnamed defendants.

Lawyers for those defendants have filed papers seeking to dismiss the cases on various legal grounds. They deny wrongdoing on their clients' part.

Garabedian said he intends to file another suit next month.
"There's no telling how many victims are out there," Garabedian said. "Who knows how long children will be coming forward against Douglas Perlitz. Pedophiles don't stop until they are caught."

All of the cases have been reassigned to U.S. District Judge Robert Chatigny in Hartford.

In 2010, Perlitz pleaded guilty to traveling from the U.S. to Haiti to engage in sexual conduct with a minor and was sentenced to 19 years and seven months in federal prison.

In late June, Georges Bossous Jr., founder and head of Word and Action Inc., will spend a week in Haiti meeting individually with the victims and family members.

Bossous, who has a masters degree in psychology, uses the interviews to formulate a preliminary treatment plan for each victim. He will be accompanied by Paul Kendrick, a Fairfield University alumnus who has been advocating for the Perlitz victims for the past three years.

During the meetings, Bossous, who is Haitian and speaks French and Creole, said he will be looking for specific signs during his interviews.

"Are they suffering from shame? Guilt? Are they having problems sleeping, eating, with self-esteem? Are they exhibiting self-destructive tendencies? These are things I want to know," he said.

The June visit was made possible by a $5,000 donation from an anonymous Massachusetts donor.