What should be taken from our intervention on Radio Grenada Broadcast.- 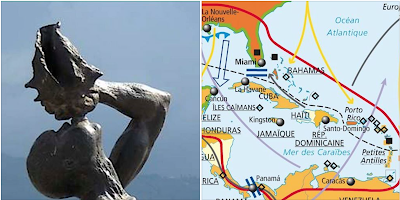 What should be taken from our intervention on Radio Grenada Broadcast.- (By Cyrus Sibert)

This Thursday, June 29, 2017, we (Cyrus Sibert) participated in a panel made up of George Grant, Margaret Francis, Jerry George, Beverley Sinclair, John Kenneison, Atherton Martin, Catherine Edwards and Netfa Safiya Francis, all journalists and professionals from the Caribbean , to discuss the situation of Mrs. Marjorie, the Haitian woman raped in Turks and Caicos and threatened with deportation because she filed a complaint.

Using a comprehensive approach, we took the opportunity to address the challenges of human trafficking in the Caribbean, issues related to the exploitation of women, children, transnational criminal networks that threaten the region's residents and the need for bringing the nations of the area closer together in a real civic movement, to know ourselves better, study our history and our social dynamics, popularize our culture and promote our common history. This requires the adoption, teaching and development of languages (Creole and Caribbean English) that can facilitate communication between nations.

Strangely, in our Caribbean, a Creole such as the one in Haiti is understood and spoken in Saint Lucia, Dominica, Saint Martin, Martinique, Guadeloupe, Guyana and other islands. There is also Caribbean English. As in Canada and Belgium, where there are two (2) languages, there is nothing to prevent this Creole and English from being promoted as a means of bringing the nations of the region closer together.

During the two-hour intervention, we focused primarily on our history. The Haitian revolution, the fruit of a long anti-slavery struggle in the entire African diaspora transplanted into the Western Hemisphere. As proof, General Henri Christophe, a native of Grenada, is a Haitian national hero, one of the main founders of the Haitian government, signatory of our Declaration of Independence. This is also the case for Dutty Boukman from Jamaica who organized the ceremony of awareness and commitment of the slaves to live free or die, to fight back, which led to the general abolition of slavery in Haiti.

It is time to look upon the anti-slavery revolution of Haiti as an Afro-Caribbean epic.

We must no longer be ashamed of our past as slaves. Because it was not our choice; Moreover, the different revolution movements of our black ancestors in the region prove that we are natural descendants of a rebellious and insubordinate people. To those who use our level of development to try and belittle us as black people, we say that the Afro-Caribbean never exterminated other peoples, our ancestors never practiced slavery, we never colonized other nations, we have never waged a war of extermination. Consequently, we are the perfect example of humanism, the precursors of freedom for all nations, without exception of race or color.

@ReseauCitadelle did not want to play the game of the colonizers by addressing the subject using the “haitiano-centric" angle. For this was the whole strategy of the colonists: to divide us by focusing solely on national or state specifications. This strategy paralyzes the Caricom which has not been able to perceive us as a Caribbean nation. As Europeans strive to present Europe as a geographical, historical, and economic entity, we must alsolearn to see the Caribbean as a whole.

If we consider the blacks of the United States as Afro-Americans without taking into account the specifications of the different states from which they originate, we must do the same and develop the Afro-Caribbean concept: a black nation, victim of human trafficking that was the slave trade, which has risen through various anti-slavery movements from the first black slave revolt in 1522 in Santo Domingo, when African Wolofs working in a sugarcane plantation rose against Admiral Don Diego Colon, the son of Christopher Columbus, to the Haitian Revolution. From this revolt came the maroons with the first free Africans and Indian communities in the assembly of Baoruco or Bahoruco. This struggle came in several forms such as the ceremony of Bois Caiman, the Battle of Vertieres, the massacre of the French.

According to one of the speakers, a citizen of Dominica who speaks Creole very well, the Caribbean must do just as the Jews did to fight against oblivion. We need an Afro-Caribbean civil society movement to cement the peoples of the region together by popularizing our history, our culture, identifying and making our strengths known to the world, working to solve our problems.

We must go beyond the organization of the CARICOM, which often seems like an exclusive club of Heads of State who often get together to have fun according to the rhythm of the dictates of the great powers. The return of anti-black racism to the world, the contempt of most black refugees and the rise of extreme right-wing racist movements in some countries must challenge us. The pejorative term "negro" applies to all of us.